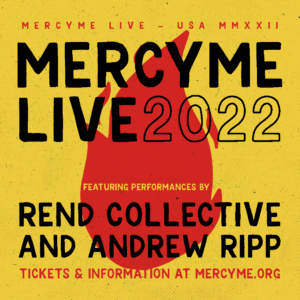 MercyMe is an American contemporary Christian music band founded in Edmond, Oklahoma. It continues to be a landmark time for the multi-platinum selling, GRAMMY® nominated, multiple American Music Award, Billboard Music Award and Dove Award winners MercyMe. They were named Billboard’s Top Christian Artist of the 2010 decade, and in 2020 received their eighth American Music Award nomination. A major motion picture based on the life of frontman Bart Millard who wrote the mega-hit song “I Can Only Imagine” after the loss of his father, opened at a remarkable No. 3 at the box office on Mar. 16, 2018 (Lionsgate, Roadside Attractions).